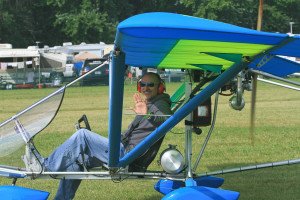 The Aerolite 103 originated in 1996 by designer Terry Raber, in Ohio.  Terry felt that many different designs of ultralights incorporated great design features, but none of them combined all of those features into one aircraft.  So he set out to design the ultimate Part 103 legal ultralight.  As the Aerolite took flight and was perfected, it was very well received in the industry, winning Grand Champion Ultralight at Oshkosh in 1997, and several other awards after that.  From 1997 thru 2012 Terry produced hundreds of Aerolite 103’s.  Although the aircraft performed wonderfully and was very popular, Terry was not able to keep up with the production and customer support necessary with that volume of production.  In 2012 U-Fly-It LLC of Deland, Florida acquired the production rights to Aerolite 103, and moved the production to Florida.  U-Fly-It, already well established in the ultralight and light sport aircraft industry, was able to organize production to meet market demand for the Aerolite 103 in the USA, as well as developing a thriving export market.  Now, once again, Aerolite 103 is a major player in the part 103 ultralight market.

The Aerolite 103 has very possibly the best overall performance of any true part 103 ultralight.  It easily makes weight with a 28 HP engine, and even with features rarely found on true ultralights such as electric start, electric flaps and brakes.  It will lift a heavy pilot into the sky with ease.  With a nose cone and windshield it is very comfortable to fly, even in cool weather, yet maintaining the joy of low and slow, open cockpit flying.  With proper clothing it can be flown year round even in colder climates.

The Aerolite uses a control yoke rather than a stick which sets it apart from most other ultralights.  The Aerolite is very  easy to enter and exit, even for people with physical difficulties.   It also very stable and easy to fly making training or transition quick and easy.  The airframe is very durable and low maintenance.  The Aerolite 103 is also very affordable.  Since it is a legal ultralight, it is delivered fully assembled, ready to fly.   Several engines may be used with the Aerolite 103, including the Hirth F33, and F23, the Kawasaki 340 and 440, and the Rotax 377, 447 and 503.  (some engines may put it over weight for part 103)