Home Flight Instruction – What to Expect

Flight Instruction – What to Expect

When you come for your first lesson, or a demo flight it is important to have an idea of what to expect.  Of course that depends a lot on which aircraft you are wanting to fly in and what the weather conditions are.  In either case, it is important to wear comfortable clothes that are flexible, especially if flying in the Taylorcraft.  Climbing in and out of the Taylorcraft for the first time can be a bit awkward, but becomes easy with a little practice.   Shoes should be soft and flexible such as tennis shoes or something similar.  Shoes with heels and bulky boots do not work well in airplanes.  You should dress according to the temperature and which aircraft you will be flying.  Below is some helpful hints for both new pilots and transitioning pilots.  If some of it is confusing to you, don’t worry, we will explain it all when you are here.  Everyone’s frame of reference is different based on their experience. 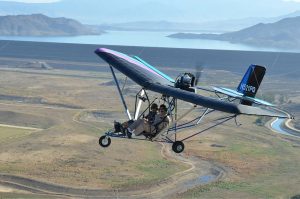 Flying in the Quicksilver is real blast!  Because it is completely open, it is a unique experience from any other aircraft.  One really nice thing about the Quicksilver is that it is extremely easy to get in, or rather get on, just sit down and buckle up.  The Quicksilver flies about 45 mph so you will be in a 45 mph wind from the time we take off till we land.  It is important to dress accordingly.  Ladies, if you have long hair you may want to consider a way to manage it.  The wind combined with cooler temperatures aloft will probably make you colder than you anticipate.  If it is 80 degrees or more on the ground you will probably be comfortable in about anything.  If it is between 70 and 80 degrees, a light jacket or sweatshirt would be appropriate.  Between 60 and 70 you may want a sweatshirt and a light jacket or a medium weight jacket.   Between 50 and 60 you will want to bundle up pretty good and wear a pair of gloves.   Between 40 and 50 degrees it’s time to put on a snow mobile suit or insulated motorcycle outfit that has elastic to seal up at your ankles, good insulated gloves, and a ski mask of some sort for your face, or a helmet with a visor.  It’s amazing how cold it feels below 50 degrees in a Quicksilver.  If dressing properly you can fly it even much colder than 40 degrees, but it takes some quality gear.  Once the temps don’t consistently get above 40, we put the Quicksilver away for the winter.    Eyewear is also important for flying the Quicksilver.  The wind will make your eyes water and make it hard to see and unpleasant.  Some sunglasses work well, while others make the air swirl around into your eyes.  It’s hard to tell which ones work and which ones don’t until you try them.  A sure solution is to wear goggles.  We have goggles here if you would like to use a pair of ours.   When scheduling a flight, keep in mind that the Quicksilver is light weight and will be affected more by wind and thermals than heavier aircraft.  The best time to fly is in the morning or evening when thermals are not active and winds are generally calmer.  If you are in the early stages of training we really try to keep in pretty calm conditions.  As you progress, we try to get you out in some breezy weather to gain experience.  Sometimes we will fly in 15-20 wind, but it’s a handful.  In the summertime evenings can be hit and miss due to thunderstorms, so mornings are preferable for your first flight with evenings being the second choice.  It would be best to avoid the middle of the day when thermals are active at first. 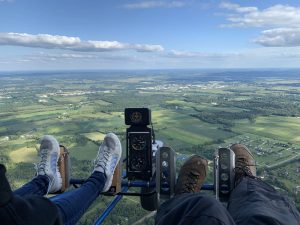 Later in your training you will get a chance to fly in bumpy weather, and it can be a lot of fun, but it might make you nervous on your first experience.   As you take the controls of the Quicksilver you will find that it is probably the easiest aircraft to fly that has ever been built.  It is very stable and predictable and flies effortlessly.  Takeoff and landing is also very easy.  If you are a GA pilot, you will be amazed at how fast the Quicksilver jumps off the runway and how steep it climbs.  You will also find it is very different because it does not have a lot of inertia.  It has a lot of drag and very little weight so the air speed changes quickly.   When landing, you will either carry some power all the way down to the runway, or make a very steep approach if power off.  Once down to the runway, when power is pulled off, the transition and flare happen very quickly compared to GA aircraft. And until you get used to it you will probably feel like you landed gear up because you sit so close to the runway!  Another characteristic of the Quicksilver and most similar aircraft is that it is very rudder dominant.  You have to steer with your feet!  In a GA airplane you use mostly ailerons and coordinate with a little rudder.  In the Quicksilver you use mostly rudder and coordinate with some aileron.  Also unique to these types of aircraft is that it is a pusher with a high thrust line.  The thrust is pushing the nose down, so when power is reduced, the nose comes up.  This is the reverse of most GA aircraft.  It is important to learn to compensate for that instinctively. But it won’t take you long to get used to it and you will forget all about spam cans!  This is flying the way flying was meant to be.  Low and slow and feeling the breeze!

The Taylorcraft is a true classic aircraft from the golden days of Aviation.  Produced in both the prewar period and the post war industrial boom along with so many other light aircraft, it is an iconic symbol of simpler times.  Our Taylorcraft is a prewar model, originally a BF-50 with a Franklin engine.  In 1974 it was converted to a BC-65 with a more reliable Continental A65.  She is an honest and simple aircraft to fly with no bad habits.  Cruising at about 90 mph on 4 gallons per hour, it is also a very economical aircraft to fly.  With a semi symmetrical airfoil with a large span and no flaps, it likes to fly!  Even with the little 65 hp continental, it will take off in a few hundred feet and climb nicely even when heavy, and it will float a long way down the runway if you come in too fast.

Many people today seem to be afraid of tailwheel airplanes, but there is nothing to worry about.  They are superior to tricycle gear airplanes in many ways and are simply an additional skill to be mastered, which adds to the fun.  And like they say, you just can’t swagger away from a tricycle gear airplane!  One thing you will soon discover when climbing into the Taylorcraft, is that apparently people were smaller in 1946.  It is not as roomy as some of the modern LSA aircraft, but will accommodate people up to around 250 lbs. or a little over, and even up to 6’4 or so. Once inside, it’s comfortable but cozy.  This aircraft is not equipped with an electrical system, which means it must be started by hand propping.  We will train you to do that if you are going to solo in this aircraft or would otherwise like to learn.  It is a simple procedure that seems to frighten people, but is safe and routine if done properly.

We do fly the Taylorcraft year round as it does have cabin heat, but it’s not particularly warm on a cold day, so dress warm if you are flying in cold weather.  The Taylorcraft is an amazingly fun airplane to fly, and if you are looking for an inexpensive, two-seat Sport Pilot airplane, they can commonly be found in nice condition for under $20,000. 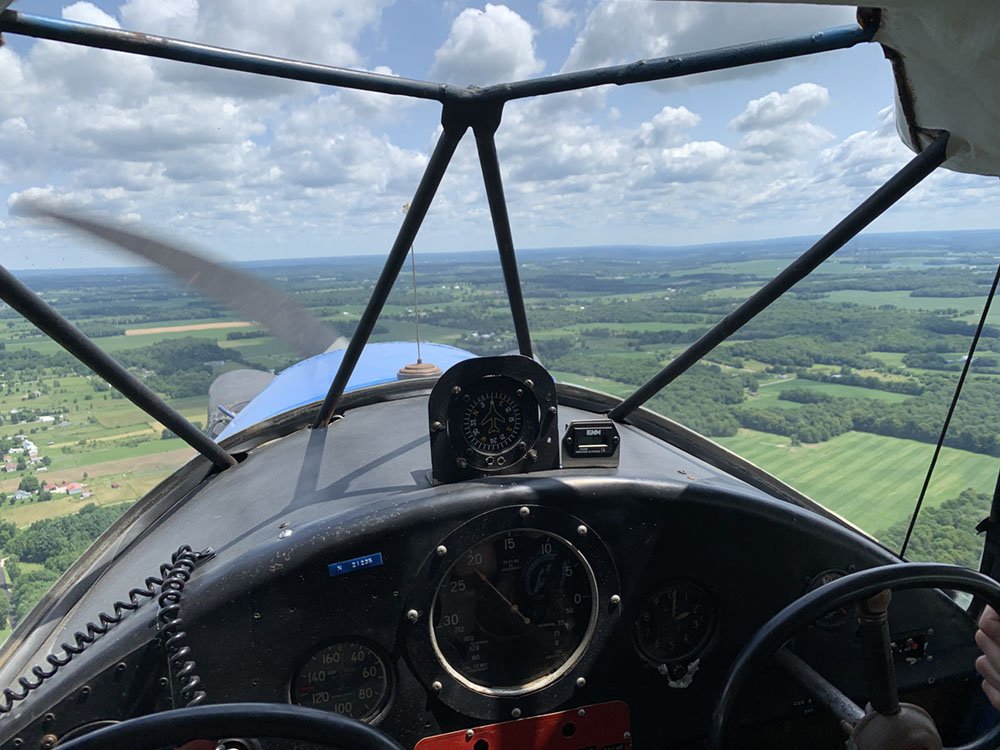 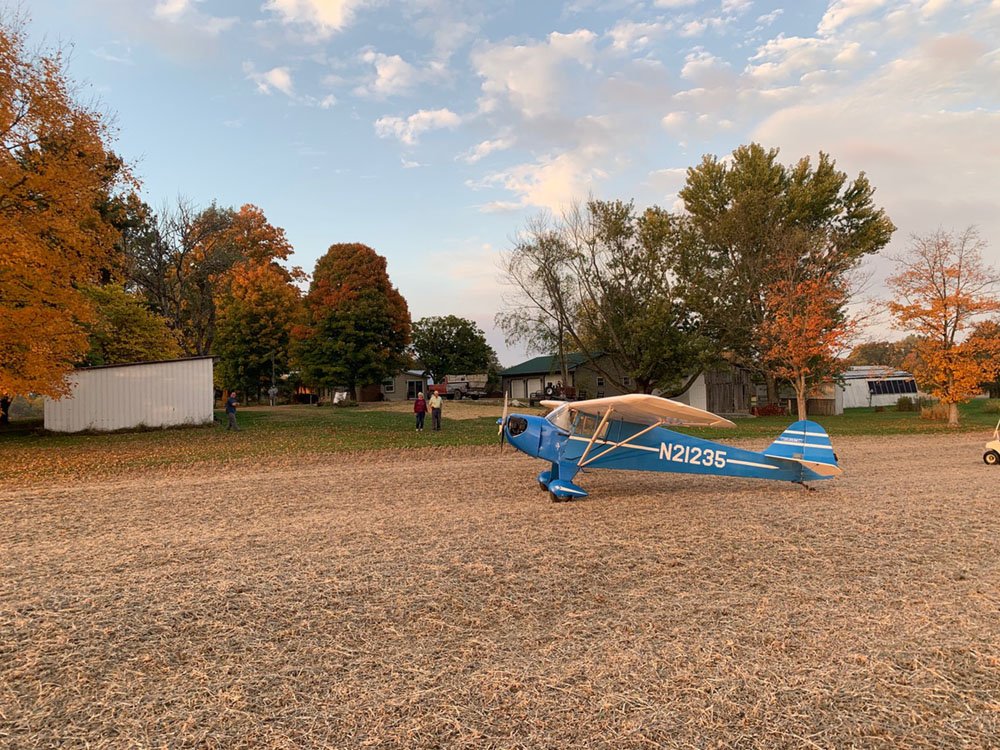