The Quad City Challenger line of aircraft are an amazing design.  Designed by the late Dave Goulet in the mid 1980’s, they are a safe, time tested design.  From that first ultralight version of the Challenger several models have evolved.  The Part 103 ultralight version is still available, as well as higher performance models that fall under the Experimental Amateur Built category, and can be flown with a Sport Pilot license.  There are many qualities of the Challenger that make it such a popular aircraft.  The visibility from a Challenger is simply incredible compared to most other aircraft on the market today.  With a high wing, and the pilot’s seat positioned ahead of the leading edge of the wing, visibility forward, to the sides, and even up is unrestricted.   The performance range of the Challengers is in just the right niche for recreational flying.  While it is fast enough to go places, it is slow enough to float along over the countryside and just enjoy the scenery.  While many people do travel in the Challenger, covering literally thousands of 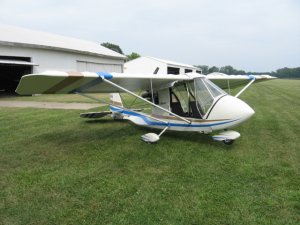 miles in a trip, it was not primarily designed as transportation.  It’s primary design was for simply for the enjoyment of flying.  As the light sport aircraft market has evolved, the demand seems to be toward faster airplanes with more fuel and baggage capacity.  Due to that demand, the XL and XS Challengers have evolved.  These models boast a higher useful load, more streamlining for faster cruise speeds, and more fuel capacity, up to 20 gallons.  The Challenger is also an all season airplane.  In the summer it can be flown with the doors off for a truly open cockpit experience, or in a few minutes the doors and even a cabin heater can be installed for comfortable winter flying.  The Challenger is also very versatile and is equally at home on land, on snow, or on the water with optional skis and floats.  In the light sport aircraft market the Challenger is probably the best value of any aircraft in it’s class.  The Challenger factory has been in business in Moline, Illinois for over 30 years under the same ownership.  Parts are readily available and reasonably priced to keep your investment flying for the long haul.  Many Challengers currently flying are well over 20 years old now and have thousands of hours on them.  If you are looking for a fun, all season aircraft that is reasonably priced, easy to build and maintain, and will last for years to come, the Challenger is one that you should strongly consider. 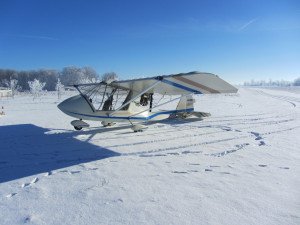