BRP, the parent company of Rotax, is a manufacturer of engines for the power sports industry including brands such as Ski-doo, Lynx, Sea-doo, Evinrude, Johnson, and Can-am.   BRP’s aviation division, Rotax, currently produces two lines of aircraft engines.  Their two stroke line currently only offers the 582 model 99, however many of their now discontinued models such as the 447 and 503 are still very popular.   The four stroke line of Rotax engines, the 912/914 series, includes several different models and horsepower ratings.  Rotax engines have been popular in the aviation world since the early 1980’s, and continue to be today.  The 582 boasts over 30,000 units sold, and continues to dominate the two stroke aviation market.  The 912 series easily dominates the light sport aircraft industry in four stroke engines, especially in the certified Special Light Sport aircraft.  The 912 series engines have become very popular in the military UAV market.  Rotax is certainly one of the most trusted names in Light Sport aviation, and should be a serious consideration for any aircraft that are designed for them. 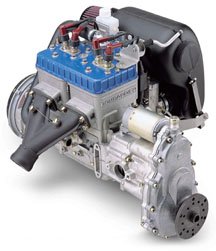 The Rotax 582 is currently the most popular two stroke aviation engine available on the market today.  In production since 1999, it has a long track record as a reliable engine.  Currently the 582 is the only ATSM certified two stroke for SLSA and ELSA aircraft in the industry.  Parts and service are readily available in many locations across the nation and throughout the world.  The 582 is available with several options and configurations to fit many different applications.    It is a liquid cooled engine and will require a radiator that is not included with the engine, but can be purchased additionally as a Rotax part, or from a third party depending on application.  The 582 can be used with the B, C, or E gearboxes, or with a third party PRSU such as the Challenger belt drive.  The B gearbox comes in a 2.0 or a 2.58 ratio and is designed for smaller, lighter weight propellers.  The B gearbox is direct drive, with the drive gear mounted directly on the crankshaft.  The C and E gearboxes are available in ratios up to 4.0:1 and are designed for use with larger diameter, heavier propellers.   The C and E gearboxes use a rubber coupling to dampen torsional vibrations and therefore run considerably smother.  Also, the C and E gearboxes use larger heavier gears and bearings making them very durable.  One other feature that the C and E gearboxes have is a hollow prop shaft which is useful for some types of adjustable pitch propellers.  The C and E gearbox are somewhat heavier and more expensive than a B gearbox, however.  Electric start is available in two ways from Rotax, as a magneto end starter motor, or if using an E gearbox it is integrated into the gearbox.  If ordering a 582 with either version of electric start it will include a solenoid and voltage regulator. (However I would discard the voltage regulator and replace it with a Keywest regulator for reliability)  There are also third party electric start units available for the 582 that can be used in applications where the Rotax versions will not work.  The 582 includes a 170 watt charging system, but does require a voltage regulator for use with 12V electrical systems.  (some lighting systems can use the AC voltage directly)   There are several exhaust configurations available for the 582 so it can be adapted to many different applications.  When ordering a new 582 the exhaust system is included, but you must specify which one you need.  If you decide to use a 582 on your aircraft, we can help you determine exactly what options and components will work best for your application. 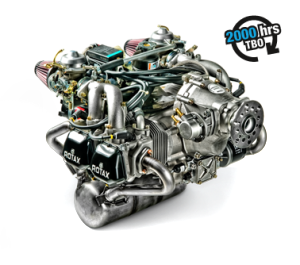 The 912 UL is a four cylinder, four stroke, horizontally opposed engine, with an integrated gear reduction.  It produces 80 horsepower at 5800 rpm and typically weighs around 160 lbs or so installed .   The 912 UL uses a dry sump lubrication system with a separate oil tank.  Cooling is a combination of air and liquid cooling.   It includes dual electronic ignition, a mechanical fuel pump, and electric start as standard equipment.  The fuel system is dual slide bore Bing carbs.  Although it is not an inexpensive engine, with a 2000 hour TBO and low fuel burn, it is still a price competitive engine in many applications.  The 912 is ATSM certified for SLSA and ELSA aircraft.  Unlike the 582, the 912 requires several additional components for installation that are not included.  Some items that will need to be purchased separately include the radiator, the oil cooler, and the exhaust system.  When you are ready to order an engine we can help you determine exactly what you need for your application. 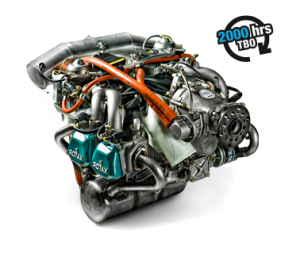 The Rotax 912 ULS is very similar to the 912 UL, except that it cranks out an additional 20 horsepower.  With an increase in weight of only about two pounds it is a very attractive option over the 912 UL.  The 912 ULS has a slightly larger bore and longer stroke than the 912 UL.  Otherwise the two engines are very similar. 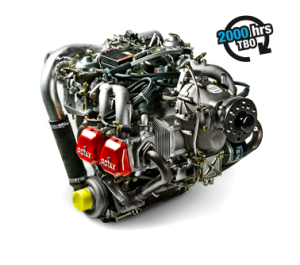 The Rotax 914 UL engine is similar to the 912 UL, but with the addition of a turbo charger giving it a horsepower rating of 115 horsepower, as well as giving it much better altitude performance.  The weight increase over the 912 UL is approximately 20 lbs.  Of course with increased horsepower comes increased cost, in many applications this engine really fits a performance niche. 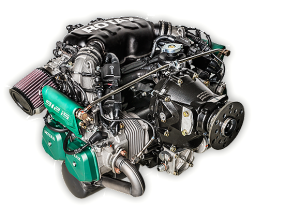 The Rotax 912 IS is the latest addition to the Rotax lineup.  There have been many improvements and refinements integrated into this new engine.  Most notably is the addition of a fully redundant electronic engine management system and fuel injection.  Also included is a can bus communication link to interface with many of todays EFIS systems allowing all of the engine data to be displayed in the cockpit.  The new 912 IS truly is an amazing engine.   One disadvantage to this engine compared to the ULS model is that it weighs approximately 20 lb more.  Also, as to be expected, the price is considerably higher than a ULS model.

If you have questions or need further information on these engines, please contact us, we will be happy to assist you.  Personal customer support is what we specialize in.

For more detailed information and specifications on these engines, please visit the Rotax corporate website here.