Quicksilver Aeronautics began back in the late 70’s as the ultralight movement started to emerge.  From weight shift gliders, to powered gliders to the ultralight aircraft, Quicksilver quickly became a leader in the industry.  As part 103 came along defining what criteria ultralights would have to conform to, the Quicksilver MX quickly became the most recognized part 103 ultralight in the industry, and probably still is.  Starting with a great design, Quicksilver went on to develop a business model and manufacturing capability that allowed them to quickly outproduce anyone else in the industry.  From that time, the Quicksilver line of aircraft have evolved into many variations of that original design, both single and two seat versions, as well as a totally different design, the GT500 and GT400.  Over the last 40 plus years Quicksilver has produced over 15,000 aircraft.  That is more aircraft than Piper and Cessna combined have produced in the same time period.  Quicksilver Aeronautics is the undisputed leader in the ultralight and light sport industry for number of aircraft produced.  Not only does that indicate a great design that people love to fly, but also that it has a long, proven safety record.  In recent years, Quicksilver has taken the lead in another category.  They have achieved ATSM Special Light Sport certification on their Sport 2SE model.  That means that it may be fully factory built, and used for hire for flight instruction and rental.  Also, it allows for an ELSA version to be built that although it falls under the “Experimental” regulations, it does not have to meet the 51% Amateur Built criteria, and therefore can be delivered fully built either by the factory or the dealer.  Soon the GT500 will also be certified in the SLSA category. 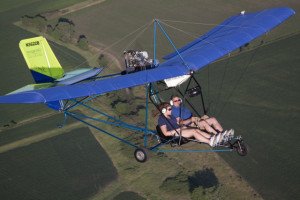 The Quicksilver models that offer a low and slow, open air experience are the Sport, Sprint, Sport 2, Sprint 2, and Sport 2S.  These models boast an incredibly short takeoff and landing ability, amazing visibility, and are very easy and relaxing to fly.  They are also some of the most competitively priced aircraft in the market.  All of these models are very easy to assemble, with assembly times as low as 40 hours!  The Sprint and Sport will  meet part 103 and can be flown as a legal ultralight.  The two seat models meet the light sport criteria and may be flown with a sport pilot license, as well as complying with the Experimental Amateur built regulations.  The Sport 2 SE is sold as a factory built SLSA aircraft, or as ELSA that can be factory or dealer built.

One of the main differences between the Sprint and the Sport models is the airfoil.  The Sprint models use what is called a single surface airfoil.  The bottom of the wing is open, rather than having a flat bottom.  This accomplishes two purposes.  One is that it saves weight, but the primary difference is in the flight characteristics.  The single surface wing will fly slower, produce more lift at slow speeds, and stall slower.  It also creates more drag and therefore will cruise at a lower speed as well.  The Sport models have a double surface wing, which gives the airfoil a flat bottom.  This increases the cruise speed, as well as increasing the roll rate.  However, the stall speed is also higher.    The Sport 2S, and SE  have a double surface wing, but also have strut braced wings, making them more aerodynamic as well as giving them a more solid feel than the cable braced models.  Another difference with the Sport 2S and SE models is the use of a top mounted engine design with a gearbox reduction drive for more thrust and lower maintenance.  All of these models have many more options that can be included when ordering a kit. 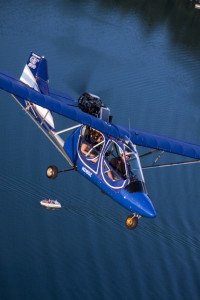 The GT500 and GT400 models are designed for people who would like to go faster and farther as well as flying in colder weather.  With cruise speeds in the 70 mph range the GT series aircraft make a nice cross country cruiser.  With a full enclosure that can be opened and closed in flight it can be comfortably flown in colder climates.  The GT400, the single seat version, can be powered by the Rotax 447, 503, or 582.  The GT500 flies great with a 582, but can also be powered by a Rotax 912, four stroke engine.   Some other features of the GT series aircraft include flaps allowing it to take off and land on shorter runways, larger fuel capacity – up to 20 gallons, and tandem seating that offers excellent visibility, and a yoke control system that is consistent with most General Aviation aircraft.  The GT series aircraft are similar in performance and features to the Challenger aircraft.  For a full comparison between the Challenger and the GT series aircraft, please see our comparison article here.